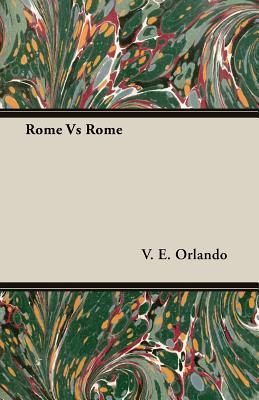 21 L PiusX 81 II. The State and the Church in Italy during the War. 101 III. Further discussion of relations be tween the State and the Church during the War. A laboratory ex periment 113 IV. From Benedict XV to Pius XL 125 V. The precondition. 137 VI. Harmony or antinomy between the Lateran Accords of 1929 and the Law of 1871 149 Appendix. The Diary of Monsignor Cerretti with a note by V. E. Or lando. 177 Bibliography 189 FOREWORD By EDWARD M.

HOUSE It pleases me to know that His Excellency, Vit torio E. Orlando, is writing, and will soon pub lish, certain incidents in his notable career, when he had the direction of Italys foreign and do mestic affairs during the World War. This is exceedingly important from the viewpoint of his torians in every land. My own endeavors during the making of the Armistice and at the Peace Conference brought me in close touch with the Italian Prime Minister. My confidence and admiration for him grew as my association with him lengthened during those turbulent years.

He had a personality that won him friends and gave him power to accomplish his purposes. His colleagues always desired to go his way as far as they reasonably could. My association with him is one of the pleasant est memories of a lifetime devoted to the public service. E. M. H. PREFACE By V.

E. ORLANDO It would be notonly inexact but erroneous to say that this volume is a translation of my book published in Italy Su alcuni miei rapporti di Go verno con la Santa Sede. On the contrary, the present work has an entirely original aspect. This statement is justified not only by the material ex tension of the work it has been more than doub led, but still more by its general character. The present publication differs from the one published in Italian in that it has two diverse characters, one of which represents a chapter of my Memoirs As a statesman and especially be cause of my governmental activity during the World War, the relations I had with the Church and the Pontificate constitute, in the great history of the War and the Peace, a chapter the importance of which does not have to be stressed, because it is manifest by itself.

But, since thete relations be tween the State and the Church in Italy were car ried out in a definite situation, at once political and juridical, we could not have a full and com plete understanding of that history if we did not have before us the conditions in which the Holy See found itself in relation with the Italian Gov ernment and this forms the second character of the book.

This bond necessarily stands out as much more intimate when we recall that the situa tion, as it was during the World War, became transformed in such a manner that it seemed, and was termed, radical and revolutionary. Moreover, it cannot be said that the relation between the purely historical part the attitude of the Holy See toward Italy during the World War and the technical - juridical part the transformation tak ing place in the situation of the Church in the Ita lian State is entirely accidentaland by this, everyone understands how that transformation is bound together with the profound upheavals caus ed by the War.

An additional proof of this is found in the fact that a first and almost decisive manifestation of the tendency toward conciliation appeared at the very moment of the conclusion of peace in March, 1919 the preconciliation chapter V of this volume...

Comments
Comments for "Rome vs. Rome":