Blood on the Border (A Hart the Regulator Western Book 5) John B. Harvey 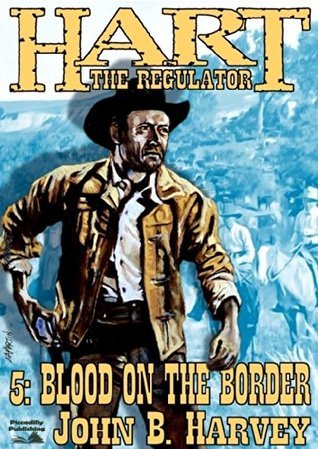 He’s tough, ruthless, and slick with a .45. He’s for hire now and he isn’t cheap...The good citizens of Caldwell had raised a fistful of dollars to pay for the railroad that would bring the Santa Fe thunderingto their town. It was not a popular idea with Clancy Shire, the local cattle baron. Then the money went like a dollar bill loose in a dust-storm. Carried off by three of the nastiest desperadoes even the border country had seen.Which explains how the folk of Caldwell are paying out to the Regulator.

They need his kind of muscle for protection. For Hart it’s another job, but not every job has a pretty widow woman as well as a payday.Could make a man sentimental...ABOUT THE AUTHORInitially a teacher of English and Drama, the novelist John Harvey began writing in 1975, and now has over 100 published books to his credit, most recently a collection of short stories, A Darker Shade of Blue, and a novel, Good Bait.

The first of his celebrated Charlie Resnick novels, Lonely Hearts, was named by The Times as one of the 100 most notable crime novels of the last century. Flesh and Blood, the first of three Frank Elder novels, was awarded both the British Crime Writers Association Silver Dagger and the US Barry Award in 2004.

In 2007 he received the CWA Cartier Diamond Dagger for Sustained Excellence in Crime Writing, and in 2009 he was made an honorary Doctor of Letters by the University of Nottingham. A published poet, John ran Slow Dancer Press for nearly twenty years- in addition, he has written many scripts for television and radio, including dramatisations of novels by Graham Greene and A.S.

Byatt and (with Shelley Silas) Paul Scotts The Raj Quartet. John was one of the original Piccadilly Cowboys and we are proud to reissue his Hart the Regulator series.

Comments
Comments for "Blood on the Border (A Hart the Regulator Western Book 5)":