Aftermath: The Clinton Impeachment and the Presidency in the Age of Political Spectacle Leonard V. Kaplan 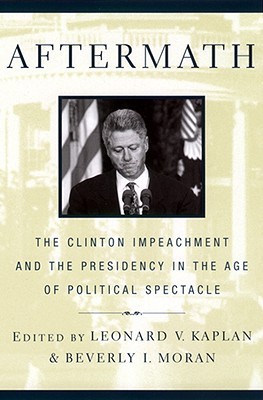 With the specter of prosecution after his term is over and the possibility of disbarment in Arkansas hanging over President Clinton, the Clinton-Lewinsky scandal and the events that have followed it show no sign of abating. The question has become what to do, and how to think, about those eight months. Did the President lie or was it plausible that he had truthfully testified to no sexual relationship? Was the job search for Monica just help for a friend or a sinister means of obtaining silence? Even if all the charges were true, did impeachment follow or was censure enough? And what are the lasting repercussions on the office of the Presidency?Aftermath: The Clinton Impeachment and the Presidency in the Age of Political Spectacle takes a multi-disciplinary approach to analyze the Clinton impeachment from political perspectives across the spectrum.

The authors attempt to tease out the meanings of the scandal from the vantage point of law, religion, public opinion, and politics, both public and personal. Further, the impeachment itself is situated broadly within the contemporary American liberal state and mined for the contradictory possibilities for reconciliation it reveals in our culture.Contributors: David T. Canon, John Cooper, Drucilla Cornell, Jean Bethke Elshtain, Robert W.

Comments
Comments for "Aftermath: The Clinton Impeachment and the Presidency in the Age of Political Spectacle":